The Shem Tov award recognizes an outstanding volunteer for a lifetime of service dedicated to the betterment and enrichment of Jewish life in Ottawa.  Nominations are solicited on an annual basis.

Nominees must be a member in good standing of the Jewish Federation of Ottawa (minimum gift to the Annual Campaign) and cannot previously have received this award.

To be considered, nominations must include 2 letters of support, including one from an organization. The nomination must address the above criteria and describe how the individual’s volunteer work has been sustained and is meaningful.

Nominations:
Nominations for the award shall be solicited annually at www.jewishottawa.com and electronically throughout the community. Nominations may be submitted at any time during the year. Nominations received by April16 shall be considered for the award and will be presented at Federation’s Annual General Meeting held in June.

Nominations will be considered for the year in which they are received, as well as in the following year.

Nature of the Award:
The name of the individual selected to be the recipient each year will be recorded on a tablet to be displayed in a place of prominence at the Soloway Jewish Community Centre. An appropriate framed picture with an inscription will be given as a gift to the award recipient. 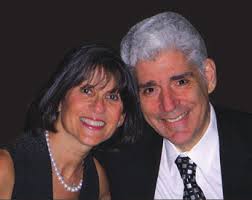 The Shem Tov Community Volunteer Award recognizes an outstanding volunteer for a lifetime of service dedicated to the betterment and enrichment of Jewish life in Ottawa.

The 2020 Shem Tov Award is shared by a couple, Sharon and David Appotive, who have each served the community in multiple ways. Sharon recently served for three years as co-chair of the Jewish Federation of Ottawa's Annual Campaign, and is on the Ottawa Jewish Community Foundation Board, and is part of Federation’s Life & Legacy team. She is an active volunteer with Jewish Family Services’ Street Smart Program, as well as Ten Yad and the Chevra Kadisha. David has served on the boards of Federation, the Ottawa Jewish Community School, Congregation Machzikei Hadas and Camp B’nai Brith of Ottawa. He created viable business models for the Ottawa Jewish Bulletin and Ottawa Vaad HaKashrut, and helps assure the financial stability and organizational vibrancy of Congregation Machzikei Hadas. Sharon and David were the 2019 Jewish National Fund honourees and also participate in community fundraising initiatives such as Hillel Lodge’s Biking for Bubbies and the Soloway Jewish Community Centre’s Biathlon.