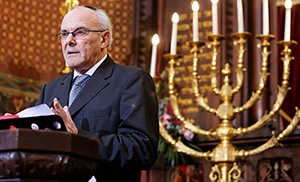 Julien Klener was born in Ostend, Belgium in 1939.

During World War II he was a hidden child in Brussels. Since 1945, being back in Ostend, he went to primary and secondary school and later on studied Germanic languages (BA) and Semitic languages (BA, MA and Ph D.). His main languages being Biblical Hebrew, Accadian, Biblical Aramaic,Talmudic Aramaic, Ugaritic, Arabic and also a non-Semitic language, Indonesian. After a few years teaching on higher secondary level he continued his career at Dutch-speaking Ghent University where he lectured until 2004. His main teachings concerned: Judaism as cultural system, Biblical Hebrew (undergraduate and graduate students) Comparative linguistics of the Afro-Asiatic languages(graduate students), Semitic [[epigraphy](graduate students)] and General Introduction to Semitic Studies(graduate students). He also studied in Amsterdam, Jerusalem and in 1977 received a Fullbrighgrant which brought him to California. During his tenure at Ghent University, he also taught, for about ten years, at the French-speaking University of Liège. He published approx. 110 monographies and articles on different aspects of his subjects. He was invited as a guest-lecturer in Paris, Madrid, Naples, Riga, Budapest, Venice, Florence, Amsterdam, Jerusalem, Porto Alegre, etc. Although being retired in 2004, he was invited to lecture on Judaism at the Faculty of Theology of the Catholic University of Leuven on Biblical-Aramaic and Philological Analysis of Biblical Texts at the Institut d' Etudes Juives of the Université Libre de Bruxelles and on Judaism at the Instituut voor Joodse Studies at the University of Antwerp, Belgium. He is an honorary active member of the section for moral and political sciences at the Royal Academy for Overseas Studies. He is also active within different,academical and non-academical, Jewish,inter-religious and inter-convictional organizations.

Since 2000 he has been the president of the Consistoire Central Israèlite de Belgique, which is the official Jewish umbrella organization representing Judaism vis-a-vis the Belgian State.