November 10
at 7 pm
(Virtual)
The Ravine: A Family, a Photograph, a Holocaust Massacre Revealed.
CHES HEM Launch event - Kristallnacht Commemoration with Dr. Wendy Lower. In 2009, a librarian at the United States Holocaust Memorial Museum handed Dr. Lower a photo that would lead her on a 10-year investigative journey. The result was her book, The Ravine, which provides unique contributions to the understanding of the Holocaust, the role of collaborators, and photographic documentation.
Register here. 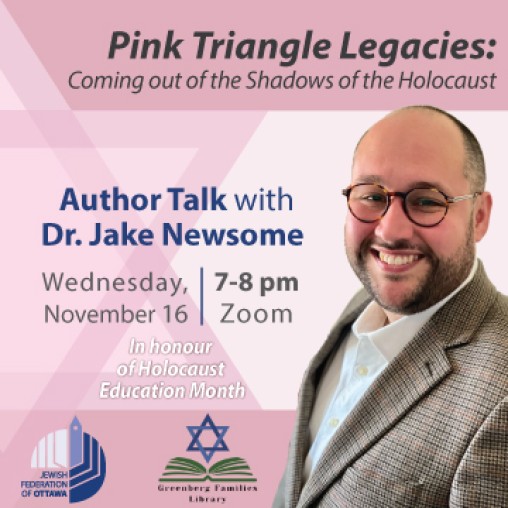 November 16
7 pm (Virtual)
“Pink Triangle Legacies” Book Talk with Dr. Jake Newsome
The Jewish Federation of Ottawa's Shoah Committee showcases "Pink Triangle Legacies: Coming out of the Shadows of the Holocaust," by Dr. Jake Newsome. This crucial work charts the historical transformation of the pink triangle from a symbol in Nazi concentration camps to an emblem of queer liberation and pride and gives voice to the experiences of LGBTQ+ Holocaust survivors.
Register here.

November 17
5 pm – 6:30 pm (Virtual)
Creating Safe Spaces: Navigating the Language of Antisemitism and Hate
CHES hosts its annual Teachers’ Workshop for educators in all Ottawa school boards and throughout Ontario free of charge. Back by popular demand, Avi Posen of Unpacked for Educators will host and facilitate the workshop, which will examine the facts and language of antisemitism and suggest ways for teachers to recognize discrimination. Register here.
November 17
7 - 8:30 pm
Memory and the Holocaust: Remembering through Survivors and Public Sources
Until recently, much of our ""memory" of the Holocaust came from survivors who talked about their experiences in public forums and elsewhere. As the number of survivors declines we have to think about new ways of keeping the memory alive. Some of this comes from movies and television (which are not always accurate) and recorded interviews held in places like the Shoah Foundation. Zoom event.
Register here.
Visit here.

November 24
7 pm, (Virtual)
Hear our Voices/ Écoutez nos Voix
The Max and Tessie Zelikovitz Centre for Jewish Studies presents a bilingual online course that uses the voices of Holocaust survivors to educate students on the Holocaust and Antisemitism. Please register to receive your link to the Zoom meeting via email here.
More info here.

December 3
9 am
Jewish Walking Tour of Berlin
The Holocaust is the most painful part of German history and must never be forgotten, nor denied (Frank-Walter Steinmeier, President of the Federal Republic of Germany).

The German Embassy in Ottawa is taking part in this year’s Holocaust Remembrance Month with virtual Jewish walking tour of Berlin. The virtual tours are live and free of charge.
Register here

Witnessess to History, Keepers of Memory: Portraits of Montreal’s Holocaust Survivors
To celebrate the exceptional contribution of these witnesses to history and keepers of memory, a photography project was launched in 2019. The Museum’s Commemoration and Oral History Coordinator, Eszter Andor, and Photographer Stéphanie Cousineau were given the mission to meet with thirty survivors in the privacy of their own homes.
Host: Montreal Holocaust Museum
https://witnessestohistory.museeholocauste.ca/

New Lives
After the Holocaust, Canada became home to over 35,000 Jewish refugees. What challenges did survivors face when they arrived? Where in Canada did they settle, and who helped them find a new home, work and education? Learn about this unique history through a collection of video testimonies recorded by archives and Holocaust education organizations throughout the country. Through personal accounts, itineraries, and photographs, explore key dates of immigration, before, during and after the Second World War.
Host: Montreal Holocaust Museum
Access: http://refairesavie.museeholocauste.ca/eng

Topography of Violence: Antisemitic Violence in Germany 1930-1938
Jews, Jewish institutions, and Jewish-owned firms and stores in the German Reich were subjected to increasing violence long before 9 November 1938. The visualization on this website presents information about the dates and locations of many different acts of violence that took place between 1930 and 1938.
Host: Judisches Museum Berlin
Access: https://www.jmberlin.de/topographie-gewalt/#/en/vis